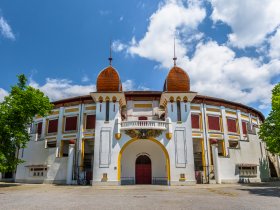 Throughout the summer, the Landes liven up to the rhythm of ferias. There are dozens of red and white parties that take place throughout the summer. Festivals culminating in the Course Landaise animated by bulls. Take advantage of your stay at our Landes campsite to take part in one of these many ferias!

Of all these ferias, that of Dax is undoubtedly the most famous. Each year, these festivities of Hispanic origin transform the city into an unparalleled place of festivity with bullfighting shows, parades, concerts or bandas. It is a great popular festival, both diurnal and nocturnal, during which everyone has fun and dresses in white adorned with a scarf and a red belt. The event lasts 5 days and always takes place in the first half of August, more precisely around the weekend of August 15.

On the program, you will attend the official opening of the celebrations by the mayor, the handing over of the keys, days full of entertainment (bullfighting shows, folk musical presentations, sporting events and gastronomic workshops), festive nights and of course the official closing. During the ferias, you will embark in a festive atmosphere to the sound of the bandas landaises which are orchestras that provide entertainment. The bandas are so famous for their abundant animations that it is inconceivable to do the ferias without them. The music of the latter also accompanies and punctuates all the moments of the bullfights. During these few days of celebrations, do not miss the bullfighting shows. Fans of this entertainment of all ages will find themselves in the arena. You will live strong moments by attending the confrontations of the picadors with the bulls. Your children will also have fun during these festivals, because the 2nd day of the ferias is dedicated to them. Indeed, they will enjoy various activities and games, such as inflatable structures, giant games, the juniorscapade (pedestrian race reserved for children) and dance and circus workshops. If you are a sports fan, you can participate in the sports program on offer, such as the feriascapade (10 km pedestrian race through the streets of the city), the tennis tournament and the Basque pelota matches. During these holidays, enjoy convivial moments with family or friends, and drink in moderation even if the alcoholic beverages are flowing freely.

THE LARGEST FERIAS IN THE LANDES

It's hard not to support the local festivals when talking about the Landes. In addition to its superb ocean beaches several kilometers long which attract surfers and the Landes forest, the 40 is also known for its Feria Landes. Bands with lively music, dances, markets, Gascon sports such as the Landes race and traditional costumes, an overview of the main Landes village festivals not to be missed during your stay at our Landes campsite.

Saint Jean celebrations in Saint Sever
Every year in June, the town of Saint-Sever (5,000 inhabitants) comes alive with the approach of the Saint-Jean celebrations. The festivities, which extend over five days, begin with a large gathering of young people who come to seize the keys to the city and hold the Landes. The program includes gastronomic competitions, games for children such as scooter races, a cavalcade, a bullfight, a musette ball, agricultural shows and many other events, all animated by Gascon groups and the incontours which makes a good Feria des Landes. If you go to the Saint-Sever celebrations, don't miss the highlight of the event, the fire of Saint-Jean.

Festivals of the Madeleine in Mont de Marsan
The Fêtes de la Madeleine in Mont-de-Marsan take place every year in July. There too, you will have the opportunity to attend bullfights, discover the Landes races and take part in several characteristic events of the region. As tradition requires, the festivities begin with the inauguration of the statue of the Course landaise. The celebrations continue on the following days with the handing over of the keys, the blessing of the arenas, entertainment for and by children (races, sports tournaments, cavalcade, inflatable structures), and the highly anticipated bullfight. Make the most of your trip to Mons to visit the city's main monuments: ramparts, Romanesque fortified houses, Lacataye dungeon, Madeleine church, Saint-Vincent-de-Paul church, etc.

Feasts of Tyrosse
The festivals of Saint-Vincent-de-Tyrosse take place each year at the end of July for 3 or 4 days. Put on your traditional Landes outfit (red and white) and set off to experience thematic days alone, in a cup or with your children. The arena park, the central place of the festivities, hosts various activities every day. A whole day is dedicated to families, with games and competitions for children including the long-awaited bullfight on wheels, as well as a parade of Landes outfits. Bullfighting jousts, giant picnics, shows, bars, restaurants: the village remains lively from morning to evening throughout the duration of the event.

Hagetmau festivals
Otherwise known as the Feria du Novillo, the Hagetmau festivals are also among the main Landes festivals and take place over several days (end of July). From equestrian shows in the arena to the handing over of the keys, through the traditional race of the cooks and the balls to end in beauty days rich in entertainment and emotions, you will have the opportunity to immerse yourself in the culture of the Landes. Bandas, cavalcade, novillada, sports tournaments, fishing competitions, tapas: the Hagetnau festival program is aimed at all visitors.

Dax Feria
Take advantage of your stay in the Landes in summer to take part in the Dax feria. The spa resort puts on its most beautiful colors every year in August to honor the ancestral Landes traditions and the Feria Landes. In particular, you can attend a bullfight, a Landes competition, a frontball tournament and several concerts. Children are not forgotten with several activities dedicated to the youngest: junioscapade, encierro, inflatable structures, introduction to climbing, raffle, fishing competition, workshops (dance, circus, pottery)... 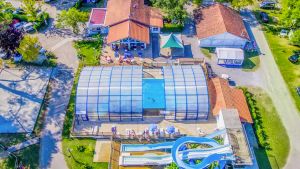 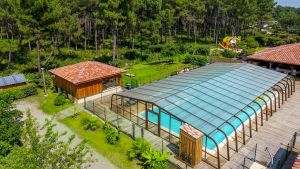 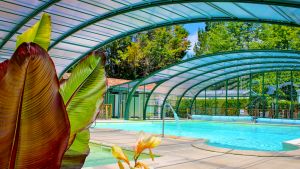